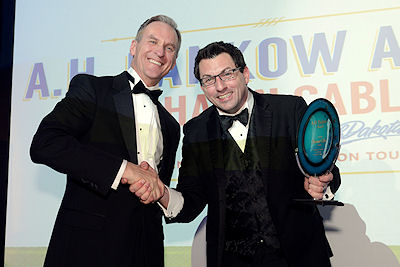 The A.H. Pankow Award recognizes a member of the broadcast media, print media, or public relations industry who has shown superior interest in and coverage of the South Dakota visitor industry. Pankow was the first publicity director for the State of South Dakota and this award honors his vision for getting coverage of the state.

Shawn Cable, KSFY meteorologist, is an enthusiastic supporter of South Dakota tourism, even though he originally hails from Minnesota. Shawn is always willing to promote our state and its attractions and activities whenever possible – from interviewing our Mount Rushmore Mascots to doing live weather segments at Christmas at the Capitol.

Shawn has an exuberance that is contagious to everyone around him.