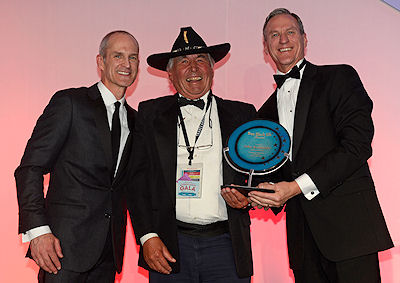 The 2015 Ben Black Elk Award recipient was John Brockelsby. “Johnny B” is a one-of-a-kind personality who has had a major impact on the tourism industry, not only with his own business but also by serving on numerous community and tourism association and advisory boards.

Johnny B has worked travel shows with the Department of Tourism for the last 15 years and has continuously served on the Governor’s Tourism Advisory Board since 2002.

In his nomination for this award, a colleague and board member commented that they met this gentleman at the 1996 Tourism Conference and they knew that his was a name and a personality to remember.

The board member went on to say that, “The only thing that has changed about this individual over the years is my appreciation for him. Every year, he finds a way to impress me more. He has a big heart for all; and a passion for South Dakota.”

That passion, coupled with his considerable PR skills, has benefitted both South Dakota and his family-owned attraction.

In May 2014, Reptile Gardens beat out zoos in Dallas, San Diego and Moscow for the title of World’s Largest Reptile Zoo as determined by the Guinness Book of World Records.