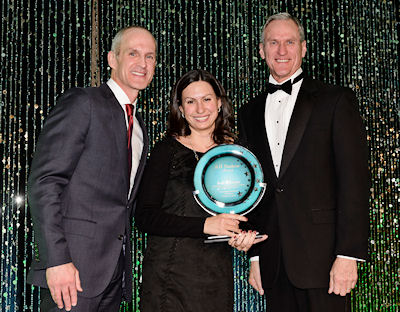 Secretary Jim Hagen and Governor Dennis Daugaard present
the 2016 A. H. Pankow Award to Jodi Schwan of Sioux Falls
at the 2016 Governor's Conference on Tourism.

Every year, the A. H. Pankow Award is presented to a representative of the broadcast media, print media or public relations industry who has shown superior interest in and coverage of the South Dakota visitor industry.

The 2016 award was presented to Jodi Schwan of the Sioux Falls Business Journal.

Jodi is a driving force in South Dakota media. Not only has she shown incredible interest in coverage of the visitor industry, but she has also invested the time necessary to provide accurate, fair and exceptional coverage.

One of Jodi’s greatest strengths is her understanding of the visitor industry and its profound effect on our state.