Presented to
Howard and Audrey Shaff 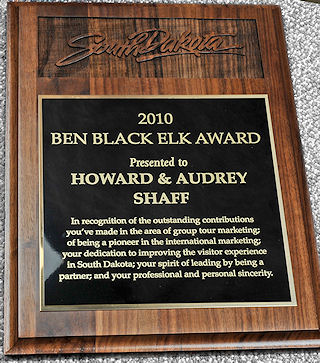 (The Shaffs were unable to attend the awards presentation
at the 2010 Governor's Conference on Tourism.)

Although they came to South Dakota to research a book in 1978, Howard and Audrey Shaff stayed and made valuable contributions to the growth of the visitor industry. On their initial visit, they realized the impact the group tour market could have on visitation to a museum, especially when they met the owners of The Rushmore Borglum Story who asked them to stay and manage it.

They established Rushmore-Borglum Tours and began offering a variety of tour-related services. The Shaffs also started a company called America Tours West and became part of the ESL Homestay program to attract international visitors, with an emphasis on Japanese students. Their home has been developed and expanded into the K Bar S Lodge outside Keystone which has facilities for group tours and meetings.

Howard and Audrey initiated the state’s Japanese marketing efforts which resulted in Friendship Japan, a tourism and business recruitment campaign. It was co-sponsored by Senator Tom Daschle and Governor George Mickelson. During that time, the state hosted key Japanese business leaders and tour companies. The Shaffs also led the way on west coast familiarization tours to meet one-on-one with Japanese companies located in San Francisco and Los Angeles. They also hosted numerous group tour participants and writers in programs led by the Office of Tourism.

As Authors, Howard and Audrey wrote numerous publications and books related to Gutzon Borglum including Six Wars at a Time, their original reason for visiting South Dakota.

The Shaffs spend time between their homes in Rapid City and Marco Island, Florida.