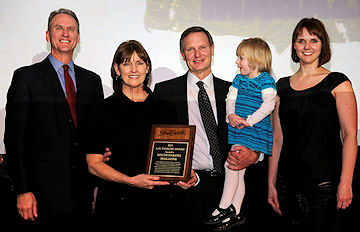 The A.H. Pankow Award recognizes a member of the broadcast media, print media, or public relations industry who has shown superior interest in and coverage of the South Dakota visitor industry. Pankow was the first publicity director for the State of South Dakota.

The bi-monthly publication is written and headquartered at Yankton, in three old brick buildings built in the 1870s by Territorial Governor John Pennington.

The staff of 10 not only works hard to publish the magazine, but they have also produced several books featuring South Dakota stories and photographs.

The 2011 A.H. Pankow award recognizes South Dakota Magazine's mission to show the beauty of South Dakota through photography and to keep our heritage alive with the tales of our famous and infamous ancestors.