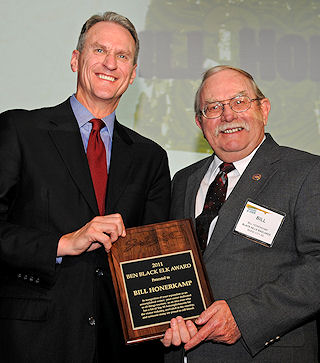 Bill Honerkamp is an innovator in tourism marketing. He is responsible for setting up the first tourism 800-number in the country. He started the lit swap; lead the charge to build the Black Hills Information Center; and, in 1995, he authored the State Tourism Tax Legislation that has generated funding for the Office of Tourism.

Bill also invited nearly 500 journalists from around the world to come to the Black Hills. When they got there, he lost their luggage. Luckily, they found it. As a result of the hosting, nearly two million dollars' worth of earned media was generated.

Bill served as the State Travel Director, and the president of Black Hills Badlands and Lakes Association before retiring late last year.