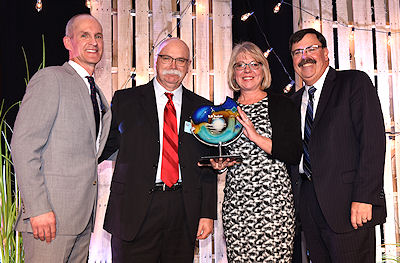 Every year, the A.H. Pankow Award is presented to a representative of the broadcast media, print media or public relations industry who has shown superior interest in and coverage of the South Dakota visitor industry.

SDPB “soars” above the rest when it comes to showcasing South Dakota.

In 2011, SDPB created a series of programs using aerial footage of the state that showed South Dakota in a way many of us had never seen it before. “Soaring South Dakota” was so popular, they created a second series, “Over South Dakota.”

During our 125th anniversary of statehood, SDPB ran a yearlong series of programs that focused on off-the-beaten-path destinations that every South Dakotan should experience.

This past fall, they debut “Savor Dakota,” a culinary program that looks at South Dakota’s food, wine and brew offerings. They also cover major tourism events like the Mount Rushmore 75th Anniversary concert and the Dignity statue dedication in Chamberlain.

For their passion and continuous promotion of our state’s history, destinations and way of life, South Dakota Public Broadcasting was honored with the 2017 A.H. Pankow Award.